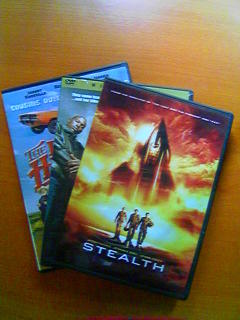 This morning I went to school as usual but when I'm back there was call fromm an unknown woman who called me to get my stuff that is sent by my friend. Well, the stuff that I'm talking about is DVDs that you can see in the pic. Frankly, I don't really know if he's my friend or not cos we knew each other through the net which I have no believe in it. However, it's proved to be real now. I kinda hardly believe that there is a kind of people like him who would do so. Hum... Maybe because we are the same nation that made him doing it. I'm happy to know such a kind people like him, anyway.